The Official Side Event EU Tourism for Blue Growth 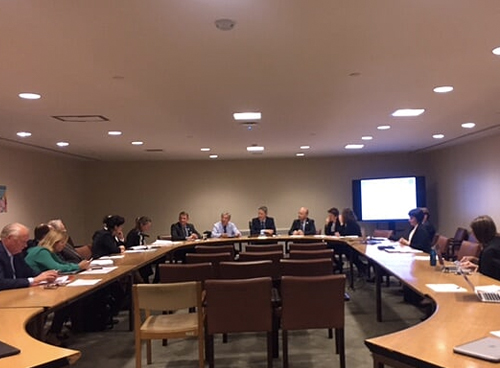 The Official Side Event « European Union Tourism Committed to Blue Growth” was held in the framework of the Ocean Conference, on Thursday the 8th of June at the United Nations Headquarters in New York. The high-level United Nations Conference focussed from the 5th to the 9th of June on “Our oceans, our future: partnering for the implementation of Sustainable Development Goal 14”, coinciding with the Oceans Day, under the leadership of the Governments of Fiji and Sweden. NECSTouR, leaded by its Member Västra Götaland Region, and with the inestimable support of the UNWTO, has organised its Side Event in this context to express the Regions’ commitment to act as federators of Sustainable Development Goals (SDGs) through tourism by sharing and influencing regional policies in view of the implementation of the 2030 Agenda. In particular, promoting sustainable coastal tourism governance aligned to the SDG 14 targets. The whole, as a legacy of the International Year of Sustainable Tourism for Development 2017 declared by the United Nations. The panel “European Union Tourism Committed to Blue Growth” gathered the highest authority of the European Commission DG Mare, namely the Commissioner for Environment, Maritime Affairs and Fisheries, Mr. Karmenu Vella, and the Head of the Directorate A – Maritime Policy and Blue Economy, Mr. Bernhard Friess, next to the Special Advisor to the Secretary General of the United Nations World Tourism Organisation, the Head of the Swedish Agency for Maritime and Water Management speaking for the Swedish Government, the Director of Ocean Planning at The Nature Conservancy, the European Environment Agency and the Region of Andalusia represented by its Secretary General for Tourism. The NECSTouR Presidency, Catalonia, together with the President of the Regional Development Committee Region of the Region Västra Götaland, counted also with the support of the European Parliament, though a video message of Mrs. Claudia Monteiro de Aguiar, Member of the Committee Transport and Tourism. The panel resulted into a Pan-European Dialogue confirming commitment and show casing good practices in smart coastal and maritime tourism governance in terms of planning, performance monitoring and measurement for policy decision making. The potential of job creation of Blue Jobs and the necessity to build up, expand and maintain blue growth networks and clusters around coastal and maritime tourism was also highlighted. Commissioner Vella invited the panellist and the audience to the conference Our Ocean which will be held in his country of origin, Malta, on 5-6 October 2017. NECSTouR is honoured by the presence of Commissioner Vella, thanks him for driving the Blue economy in Europe and accepts his invitation as an upcoming appointment in the NECSTouR agenda.

All news
Back to top